Giovanni van Bronckhorst has been sacked by Rangers after a year in charge at Ibrox.

Rangers are nine points behind leaders Celtic in the Scottish Premiership and have endured a torrid Champions League campaign that has seen the club lose all six of their group-stage matches, including a 7-1 hammering of Liverpool.

Please use the Chrome browser for a more accessible video player 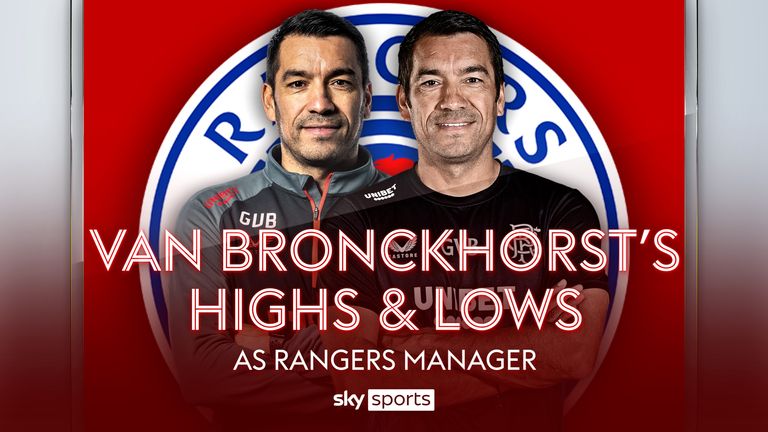 Van Bronkhorst – who replaced Steven Gerrard last November on a three-and-a-half-year deal – will become one of the shortest-serving permanent managers in the club’s history, with only Pedro Caixinha and Paul Le Guen leaving sooner.

The Scottish Premiership is now suspended for the World Cup, with Rangers’ next game against Hibernian at Ibrox on December 15. Live on Sky Sports.

‘Results and performance expectations not met’

A Rangers statement read: “Rangers Football Club today confirms that it has parted company with manager Giovanni van Bronckhorst. The board would like to express their sincere thanks to Gio for all his efforts since becoming manager.

“Gio joined the club almost a year ago and led the club to their fifth European final and won the Scottish Cup last May. After 12 years, he led the team to their first Champions League qualification.

“Unfortunately, results and performances in recent months have not met expectations and the board has today decided to terminate the manager’s contract.

“The search for a new manager is now underway.”

Chairman Douglas Park said: “I want to thank Gio for his hard work over the last 12 months and, in particular, taking the club to the Europa League final and winning the Scottish Cup last season.

“Unfortunately, recent results have not met our or Gio’s expectations and we have taken this difficult decision today. Everyone at Rangers wishes Gio every success in the future.”

What went wrong for Van Bronkhorst at Rangers?

With the club facing an uphill task in overhauling Celtic’s nine-point lead in the Scottish Premiership and no European football to look forward to after the World Cup break following a miserable Champions League campaign, Rangers are on the hunt for a new manager.

Before Rangers return to action against Hibernian, whoever takes over will have plenty to think about Live on Sky Sports On December 15th.

Chris Boyd Analyzes what went wrong for Rangers and the Dutch on the following issues:

Follow every Rangers game in the Scottish Premiership this season with our live blog on the Sky Sports website and app, and Watch match highlights for free.

Get all this and more by downloading – including notifications sent straight to your phone The Sky Sports Scores app And setting the Rangers as your favorite team.

Expand your PS5 storage with this Black Friday bargain

The Best Tablet For Reading: 2022 Picks